New Zealand Post Group (NZPG): NZPG consists of a range of businesses, providing communication and business solutions to the New Zealand public and businesses, across all sectors and industries. Products and services range from the core mail business, through to banking and digital solutions.

NZPG, like many businesses after the global financial crisis, undertook a business review, and identified that there were a number of missed opportunities to respond to customer and market trends. It was realised that these opportunities would continue to be missed while the organisation was ‘stuck’ in old modes of operation.

In late 2011, the Group Leadership Team, consisting of the Group CEO, CFO, Group Heads and General Managers, began a transformation and continuous improvement programme, to improve the overall responsiveness of the organisation. This transformation led to the creation of the Sorting Room, a visualisation of the state of the organisation and its strategic initiatives, as well as related cultural and process changes.

This new approach to corporate strategy emphasised simplicity, visibility and trust, and ultimately changed the way the NZPG Executive operates.

The need to be more responsive to changes in customer behaviour, and changes in the marketplace, was the primary stimulus for organisational transformation. Long feedback cycles were limiting the ability for the organisation to execute, and communicate, corporate strategy, which, in turn, limited its responsiveness.

Historically, the monthly executive board meetings were not effective at resolving organisational issues, or driving strategic change. These meetings usually lasted all day, with agendas filled with lengthy and unwieldy ‘FYI’ papers, that were often unrelated to the goals of the Group Leadership Team. The result was that participants would lose focus, and, after a certain point, ‘the will to live’.

The rapidly changing business environment was the final catalyst for this transformation. This needed a new approach, where the focus was on solving problems from a group perspective, rather than the traditional siloed one.

To address these problems, the Group General Manager of Innovation identified that the organisation needed a collaborative, problem-solving and decision-making environment, and so the ‘Sorting Room’ was born.

Drawing on Agile, Lean Six Sigma and Systems Thinking methods, the Sorting Room is a dramatic change in the way the Group Leadership Team operates. It is a central space that provides oversight of the strategic initiatives of the organisation, and it is reinforced with a weekly forum for the Group Leadership Team, to debate the strategic challenges facing the business, as well as emergent incidents and risks.

Each strategic initiative (such as revenue growth, business improvement and leadership) is allocated to an executive to champion. This person (and their group/division) is responsible for the delivery of the initiative, and the programmes of work underneath it. These programmes of work are rigorously monitored, and have strong gating processes, especially those programmes with large capital investment.

The weekly Sorting Room meeting starts by focusing on the impediments to success from across the business, particularly anything that affects staff. This is followed by the main agenda; an in-depth analysis into two of the strategic initiative programmes, by the relevant, responsible executive.

The Sorting Room meetings are not meant as a status report. It is an environment where the executive can share information and help each other. This means that if an in-depth analysis is put on the agenda, it is because the responsible executive has an issue to solve, and wants the help of their peers.

As a final step, the impact of each completed strategic initiative is measured against predefined metrics. These are an important part of the feedback loop, and ensure that the initiatives lead to quantifiable outcomes for the organisation.

Differences between the old and new states

The room itself contains a view of all the strategic initiatives, and associated work, across the organisation. There are five main areas to the room. 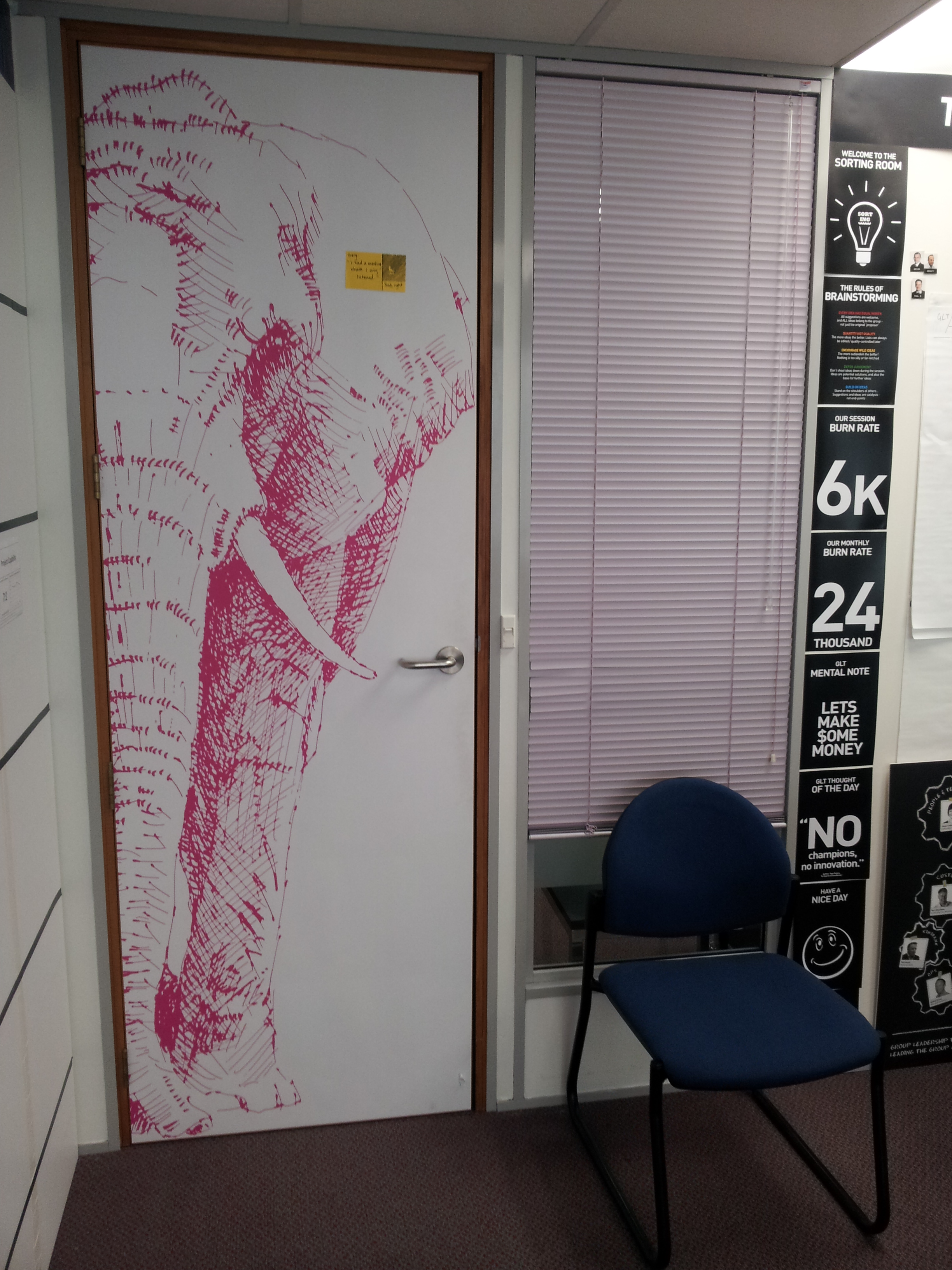 Each task on the Kanban Board is represented by a sticky note. Each note is colour coded according to the strategic aspect (e.g. people, process, customer, and finance) that the activity will affect.

Additionally, to foster a culture of accountability, a photo of the responsible executive is attached to each note. This means that the Group Leadership Team can simply look at the wall, and determine the mix of impact across time, as well as who is responsible.

In order to promote a culture of transparency beyond the Group Leadership Team, the Sorting Room is available for anyone in the organisation to access and use. What has been found, is that teams will often use this room to hold their team meetings. The only difficulty this creates is that confidential, strategic initiatives have to use a code name, such as if the NZPG is doing a divestment or acquisition.

Finally, a senior manager within the organisation was selected to take on the responsibilities of the Executive Scrum Master. This person is responsible for facilitating the Sorting Room meetings, using an adapted Agile format, and utilising the above Kanban techniques. Given the sensitive nature of the Sorting Room meetings, it was important that the facilitator was somebody the Group Leadership Team could trust.

The Sorting Room was implemented in response to the challenge to find a better way to enhance collaboration between the Group Leadership Team in order to solve business problems, rather than the traditional ‘boardroom’ format. The challenge was accepted, and implemented, on one condition, they all agree to trial it, come what may, for at least six months.

It was important that the transformation was effective, without being expensive. By leveraging internal talent, such as using the Business Improvement team to manage the implementation, and the design team to create colourful and appealing walls and plans, NZPG was able to implement the initial version of the Sorting Room and related processes within three weeks, with a minimal budget.

By engaging the Executive Scrum Master early on in the transformation process, the Group Leadership Team was guided through the new processes. This negated the need for any major training, beyond a brief introduction to the Sorting Room.

During the initial phase, the Head of Corporate Affairs was included, to communicate the changes across the organisation. They were responsible for broadcasting a monthly communiqué to all staff on what the ‘Sorting Room’ was, and the range of issues being addressed by the Group Leadership Team. The implicit message was: ‘There is a new place and process to go through to get decisions from the Group Leadership Team, and it is very different from the previous format’.

The transformation itself adopted an iterative approach. The new processes were trialled based on a ‘pure’ Agile format, and then reviewed every six months to meet the current needs, and ways of working, of the Group Leadership Team.

Within the first six months, the Group Leadership Team was starting to realise the benefits of the Sorting Room. Through strong, robust conversations around strategy, there was greater visibility and collaboration between the executives, that, in turn, led to concrete actions being undertaken. By the end of 12 months, the Sorting Room had been enhanced to include focus on impediments, new visual cues on the Kanban Boards, as well as the new Scale Wall.

Initially, there was some resistance to the change, especially when the level of transparency became evident. The impact of having your photo attached to a post-it on a wall that anyone in the organisation could view, was powerful. This has led to the executives being significantly more open, and receptive, to being held accountable by their ‘team’.

NZPG was also in the midst of changing from a federated business model, to a unified group. Therefore, the executive transformation also had to contend with the cultural lag associated with this organisational change.

Outside the executive, the only people who directly experienced this transformation were those presenting papers. Because of the shift in focus to problem solving, not all presenters received an easy ride. Those that were contributing to solutions had a more positive experience.

Overall, the outcomes have been very positive, with substantial improvements compared to the original format. There are fewer FYI papers, and a greater focus on problem solving. There has been a tremendous impact on the level of collaboration, as the executive benefits from weekly meetings, and see each other far more frequently. There is a real sense that the executive are working as a team.

There has also been a noticeable difference in behaviours amongst the Group Leadership Team. The time estimations of actions have become more realistic, as has the substance of the actions. The executives are significantly more open, and receptive, to being held accountable by their ‘team’.

The introduction of the Sorting Room has also had a pervasive effect on the wider organisational culture. There is a greater emphasis for the executives to work as a single team, rather than the traditional siloed approach. This has led to a greater understanding of each other’s problems, and a collective ownership of responsibility.

Finally, the effect of going through the new process, and the associated level of visibility, has meant that this format has begun to be mimicked across the organisation.

The Sorting Room will continue to be optimised to get the best from the Group Leadership Team. Change takes time, even at executive level, and after the initial resistance by some, all are on board, and taking part in making the Sorting Room work.