We will discuss two different companies, both in the fashion mail-order market, with a huge need to change towards an Internet model as a survival necessity.

The first company is based in Spain, named Venca, with about 400 workers and started a transition to e-commerce 15 years ago, but has dramatically accelerated within the last 3 years. The second company is based in France, named Movitex, with about 700 workers. Their transition to e-commerce has been much slower due to their older customer base. However, even their consumer habits have been changing very quickly as 'silver customers' convert into 'silver surfers'. Movitex is also launching a new pure player brand, so that the need for a cultural change is extremely important.

Some of you may have already seen some of my presentations about agile marketing (http://fr.slideshare.net/ioninteractive/agile-marketing-april2014) and may have thought “well it's fine, but only applicable to young e-commerce oriented companies, with a small historical background”. The fact is, I have had the opportunity to help these two, very different, marketing teams by applying agile methods and culture. What is remarkable is the similarity of the results and their evolution. I would like to explain to you the gains and benefits I found over the short (2 to 4 months) and middle-term (1 year).

Both teams are quite similar in terms of their commercial background and evolution. They are part of the trend of B2C companies moving from the mail-order fashion world to the e-commerce fashion world, in two different countries. They both find themselves at the big change point where the old methods and processes don't work well any more. There are 15 people in the ecommerce team from the first company (Team A) with a lot of specialists, and 45 in the ecommerce team from the second company, separated in three departments with 3 bosses (Team B).

Finally, they both have daily contacts with IT, customer relations and purchasing department (responsible for the fashion assortment). Those daily contacts are often, more and more, conflictual.

Traditionally, marketing in mail-order companies were focused around strict planning; 2-year strategies and forecast 1 year in advance with a high level of control and no right-to-fail for the catalogues. They often lacked any reaction capacity and decisions would have to go through a "committee". This meant that their capacity to react to commercial changes was very poor over the short or very short-term.

On the other side, they have reached the apex of their improvement potential within each silo or part of the value chain. However, the methods they used didn't allow them to reach the next step which is collaborate beyond each specialty.

Team A had the opportunity to watch at the IT department implement agile methods & lean tools and could appreciate the way this IT team was improving; both in terms of quality and velocity of work. These approaches also seemed to improve moral and the rate of innovations in the IT teams. The first reaction of the CMO was to copy this for the Marketing department within the e-commerce team.

With Team B, the launch of a pure player brand, and the cultural inability of the team to react after the launch, forced the Board of Directors to look after another solution – which led to trying Agile methods.

Team A, started with the management of their IT projects in an agile mode. When the Marketing product owner, who was involved in all IT projects, was trained in agile, they brought this over the the marketing team to manage their new prioritised agile backlog.

The use of the Scrum method was piloted within two internal projects at Marketing and then for a multidisciplinary project about TV campaigns. This last project included people from 3 other departments on a daily basis, with demos and retrospectives every 2 weeks. All 3 of these projects were successes in both time and quality.

After 9 months working on projects, Team A then implemented a Kanban board for operational everyday work. The same habits were used as in Scrum: demo every 2 weeks, retrospective every 2 weeks. Only the planning occurs on a daily basis. This board also contains commercial KPIs actualized on a daily basis.

After a further 3 months, it was decided to apply Scrum for all Marketing projects, even if involving other departments.

In team B, the main goal was to solve a critical problem: the operations for multiple channel campaigns. The difficulty was to include 6 teams and 15 people on a daily basis around 3 parallel boards, one per overlapping campaign. At the beginning, the idea was to minimize the number of rules (based on the KISS principle). The high level of complexity in the team (number of people, number of departments and interests, low maturity in taking decisions) conditioned a very simple approach: only daily standups, with a retrospective at the end of a campaign, and simple stories on the boards. The efforts were focused on discipline: 15 min per daily standup, everything must be written and moved, every decision in a retrospective is converted in a story, decisions must be transparent.

The success could be seen within 2 months (better quality, on-time campaigns at least) and inspired other teams in the organisation to try the Kanban system. With the same way of working: low-level of complication and high-level of discipline. Within another 2 months, another 5 teams could begin to see short-term positive effects. 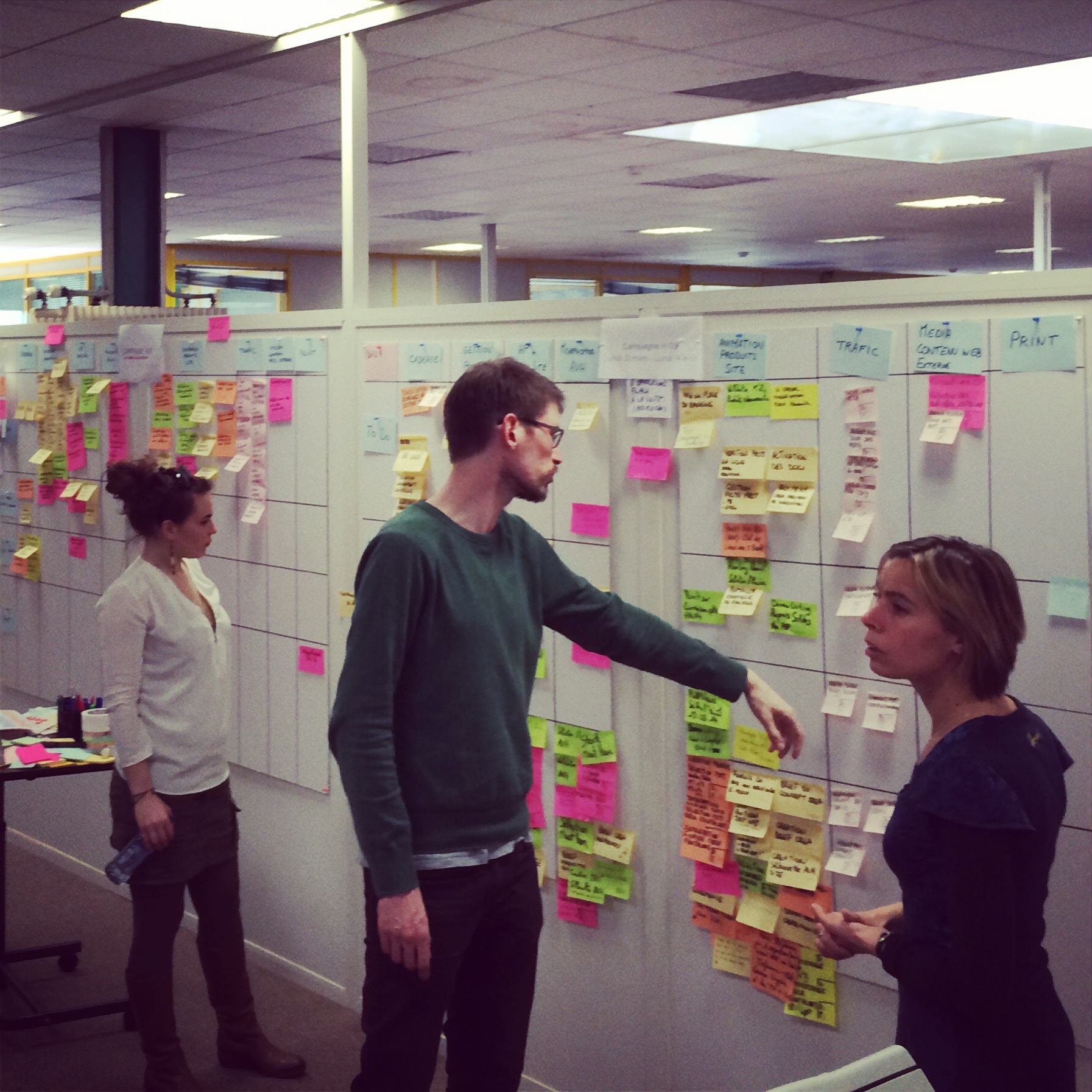 What did work well

The challenges were quite different in both cases because of the environment.

In Team A, because of the fact that they were copying another team, it was important to give the people enough autonomy to build their boards and their habits themselves. It would have been counter-productive to force them to adapt some habits only because IT did.

In Team B, Marketing was the first team to try agile and had to operate in a culture begging for dates, calendars, short-term goals ... as in the old model. This informed our approach of: let's start with the single most important process in the new brand. And let's convert it into a success story before we try to implement it in other teams. The other major challenge was to maintain a high level of transparency during the transition; we spent a lot of time explaining to the others what was happening.

For Team A, the goal is to organize the change from the mail-order marketing approach to manage multiple-channel customer experience. They would like to implement lean startup principles, such as minimum viable product or design thinking.

For Team B, the method will be extended to the IT projects, to all big commercial projects, and to the mail-order marketing! Then the role of management becomes one of prioritization, learning to do less and to give more autonomy; this is being worked through by direct coaching of the directors and managers.

Sylvain Loubradou has been working over 15 years in by Internet wave of change hard hit companies. He tried during 10 years applying collabortive tools within his logistical teams as project manager and then supply chain director until he discovered agile methods and culture while entering as IT director in Spain. Applying during three years intensively the agile culture within IT and then outside IT in other departments, he could help transforming people and teams from a classical top-down behaviour to self-organized teams, innovating regardless to the crisis. Since 2014, he works for different private companies or public organizations (universities for instance) as cultural hacker to implement the agile mindset and methods and help creating pleasure and innovations at work. Member of a non lucrative association about agile, lean methodologies and makerspace.